Federal Cigar began its rich history in 1921 when it opened its doors in downtown Portsmouth as United Tobacco. United Tobacco had been around since 1904 but for reasons unknown began closing its locations across the country, however by that time the store had become a staple of Portsmouth so Mr. Goodman, the stores chief tobacconist, purchased the business and it was then that he officially changed the name to Federal Cigar.

Mr. Goodman owned and operated the business until his retirement, when in 1960 he sold to Harold Silverman. During Mr. Silverman’s ownership, Federal Cigar became a center for politics, current events and town business and in 1981 when he retired; the store was passed onto Leonard Segrin who had worked for Harold for many years. The company remained in good hands and continued its long history of quality, community, and service until Leonard’s retirement in 2008 when the company was purchased by current ownership. Federal Cigar, with close to 100 years’ experience as professional tobacconists is one of the oldest running cigar shops in America – a distinction which gives us great pride.

With this history of experience, industry connections and successful operations as our foundation, Federal Cigar has expanded to three locations serving Southeastern NH and in 2014 we enhanced our customers experience and enjoyment by incorporating two amazing lounges at our Portsmouth and Dover locations. 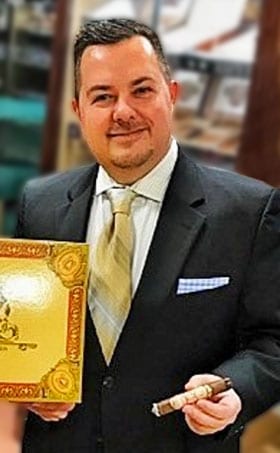 As a ten+ year veteran of the cigar industry, Jeremy Soares is truly a world-class cigar guy. He’s probably forgotten more than most people will ever know about cigars. For over a decade he has connected with some of the biggest names in the cigar industry and possesses the kind of expertise that can only come from many years of being so active in the cigar community. Jeremy knows just what to put in your hand… something new, something classic, something great – the perfect experience. He has an infectious laugh, high energy, and always goes the extra mile to ensure that you experience the highest level of service.